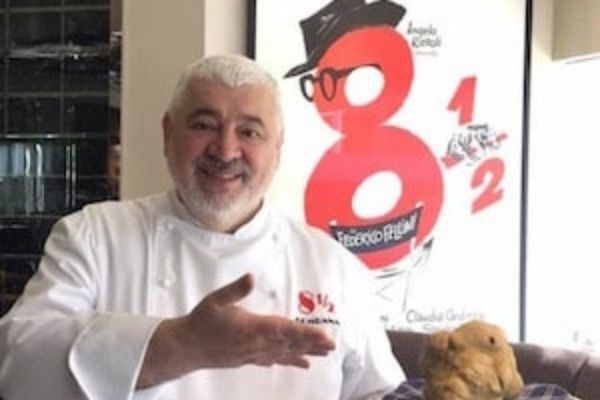 Born in Bergamo, he began to develop his passion for culinary art at the hotel training center and under the guidance of Ezio Santin at the Antica osteria del Ponte, now a starred restaurant on the outskirts of Milan. In 1983 he joined the famous Rex restaurant in Los Angeles, where he was appreciated for his simple regional cuisine. The owner Mauro Vincenti has often dedicated his location to “post-Oscar” parties by hosting other important chefs such as Gianfranco Vissani, Michel Rostang and Pinuccio Alia.

Bombana arrived in Hong Kong in June 1993 to open the Toscana restaurant inside the Ritz Carlton hotel which in a very short time has won a special place in the heart of many Hong Kong gourmets. During the 15 years spent at Toscana, Bombana has also influenced the kitchens of the Ritz Carltons of Laguna Niguel, California, Boston, Osaka, Seoul and Singapore with his consultancy. His advice to the Crystal Symphony Cruise Ship and to the gastronomic line of United Airlines’ First and Business Class flights for all flights in Asia was significant.

In 2006, he was elected Ambassador in the world of the Alba white truffle by the Cavour Regional Enoteca. After the experience at the Toscana restaurant, ended in 2008, during the summer of 2009 Bombana embarks on a new adventure with his friend colleague Roland Schuller. Their restaurant, The Drawing Room, was awarded with the Michelin star in less than a year.

In 2010 Bombana is ready for his personal big project. A restaurant that reflects his philosophy, his love for Italian cuisine, his research for precious ingredients from all over the world.

The consecration later came in December 2011 with the third Michelin star, the first and only Italian restaurants abroad to date.

Bombana made himself known and appreciated in China with the opening, in 2012, of 8 ½ Eight and a Half BOMBANA Shanghai (today two Michelin stars) and, in 2013, of Opera Bombana in Beijing. Two different restaurants which reflect the identity of the Bergamasque chef, who has been committed for years to promoting great Italian cuisine in Asia.

Umberto Bombana’s journey continues with the opening, in June 2015, of the third 8 ½ Otto e Mezzo BOMBANA at Galaxy Macao, today a Michelin star. In 2017, the Chef inaugurated Octavium, his “laboratory” restaurant and in 2019 he launched a new project with his colleague Master Dim Sum Wong Yiu-Por: NOVE, his first Cantonese restaurant.